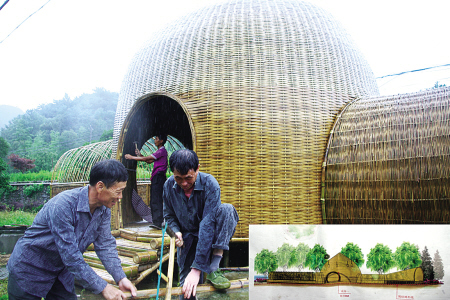 In the numerous farmhouses in Dagu Township, Fenghua, there are seats made of bamboo, the middle is shaped like a yurt, and the two sides are connected to a circular promenade with exotic gardens. The builder of this greenhouse is Wang Ruxian, a peasant in Jianling Village, 69 years old. The day before yesterday, Wang Ruxian arrived in Qingdao, Shandong Province to construct the 2014 Qingdao World Horticultural Expo (referred to as â€œQingdao Shiyuan Clubâ€) on-site. In the near future, greenhouses that are twice as big as farmhouse music in Daxie will be presented to tourists both at home and abroad.

It is understood that this time, the Qingdao World Horticultural Exposition will request the construction of a bamboo garden, and the organizers have found out Wang Ruxian of Fenghua through various parties. "When they asked me if I would build a greenhouse, I asked if I could show them in kind. However, the other party said that they had seen a greenhouse made of bamboo when they were studying in Africa, but let me go to Africa to observe the conditions. The only thing they can provide is a simple sketch map of a greenhouse. Later, I made this small farmhouse in the farmhouse, according to the schematic diagram."

This flower house is 5 meters wide and high, plus the promenade on both sides, sharing a total of 0.6 million kilograms of bamboo, which took 70 days. On the one side of the gallery, according to the form requirements of the organizer's schematic diagram, Wang Ruxian had a lot of brains to use, and he finally adopted a hard-to-find Aoki bamboo. And this ephemeral bamboo of more than 1,500 kilograms, he searched for more than a month on the Dagu Mountain. â€œAfter the framework was completed, the organizers of Qingdao came to watch two times and immediately stated that at present there is not a greenhouse in China that is built like this. Because the World Park will be in operation in October this year, the organizers hope that I can Take the construction task of the World Horticultural Garden.â€ Wang Ruxian said that this time he and four apprentices went to Qingdao, Shandong. The bamboo used in the flower house is from the Fenghua University. They prepared a total of 15,000 kilograms of bamboo, which is expected to be completed in 80 days.

Fenghua Daxu has been rich in bamboo since ancient times. Wang Ruxian, who had been in contact with bamboo since childhood, has a special liking for bamboo and learned to use bamboo to make houses, archways, pavilions, and bamboo bridges.

Wang Ruxian began learning bamboo stools with her eldest brother at the age of 18. She was able to use bamboo to make bamboo stools and bamboo beds alone after six months. Thirteen years ago, by chance, someone asked if he could build a few bamboo houses for use by those who watched flowers and trees. Wang Ruxian will come to her with a loud voice. The mountain is full of bamboo. If you build a house without cement blocks, you will not only save costs but also use bamboo. So he tried to do it while groping. Before long, the three bamboo houses were built. The three bamboo houses are still standing very solidly on the ridge of the Jiangmu Tomb Road in Xikou, Fenghua. Its fame has not only passed through Fenghua for a long time, but also has been invited to edit bamboo in places like Hangzhou, Jiangsu and Anhui.

it is divide into some kinds of prints,such as reactive print,pigment print,discharge print,Digital Print etc. Design can be decide by customers.